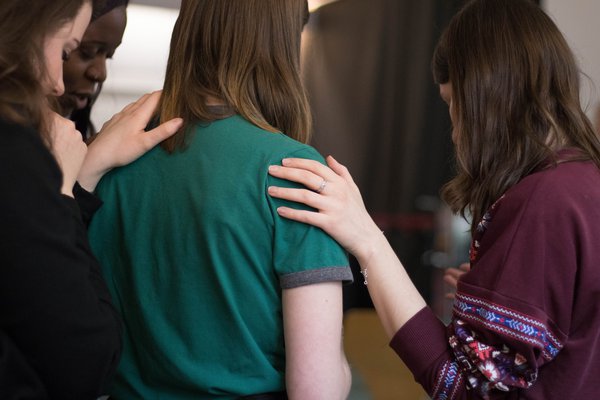 When Jessica needed a safe place to live to escape a toxic relationship, she had no idea something like Front Porch Housing existed.

“I had gone through rehab, but I was still in a relationship I was trying to get out of,” she says. “I was trying to stay clean, but I didn’t have a job and I was trapped in this cycle of abuse.”

Jessica grew up in a Christian home, and even attended Grace Church during middle school, but her family life was dysfunctional. As a teenager, Jessica began to rebel, and several bad choices led her down a path to addiction.

During the ups and downs of the following years, Jessica found help through Narcotics Anonymous. In 2020, while going to NA and fighting for sobriety, Jessica was financially dependent on a relationship that hindered her recovery. A friend mentioned Front Porch Housing might be able to help, and recommended Jessica apply for it.

“I was desperate and scared,” she says. “I didn’t realize what I was getting into, but there were all of these connections.”

Through Front Porch, Jessica immediately found a safe place for herself and her two daughters to live. Still, it took some time for Jessica to move out of isolation and open up. She soon discovered that the more she invested in the program, the more God moved. He had surrounded her with a loving, supportive community who would care for her despite her struggles.

“I haven’t always gotten it perfect,” Jessica says. “The process of leaving that relationship was difficult, and I thought they were just going to wash their hands of me. But they didn’t. They’ve come alongside me and my kids. Now we have that stability and that safety net.”

Since joining the housing community, Jessica and her daughters have found a safe place to process and heal, allowing them to take steps towards a new life. Jessica now works full time, and they’ve been able to attend counseling, as well as dive into church community.

“I didn’t know anything like this existed,” Jessica says. “It is literally life changing. You don’t have to do it alone. They’ll love you till you love yourself.”